Altaic (Mongol, Turk, Kirghiz, Uighur, etc) Armour sets were mostly looted/stolen from China, Persia or other defeated foes but I'd like to see a set similar to the standard of the Kheshig (these were like the Knights of the Mongol Empire).

Modern Day guys "role playing" and posing in such gear:

This is more of the "average" war gear used by the various Altaic nations and tribes of that time.


This is an accurate video about the equipment Mongol warriors used, but other groups like the Cumans, Kipchaks, Turks, Huns, Bolghars, etc


It would be cool if we had something like the armours represented in Ghost of Tsushima, even thoughi t's not historically accurate (this isn't a on real human history though). 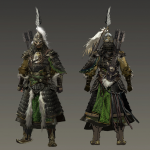 We should be able to product such armours made from metals that would be light weight (like a steel set would weigh 16 but provide the protection little better than Molarium set
Reactions: Garfielf, PatWins and Yerlan
Y

Definitely important for roleplayers. and also making it possible to use metals will make it somewhat more viable for the current meta.

the Jungle. Meditating on things to come.

Have you found one on the asset store?